An idea is born at Hacksoton 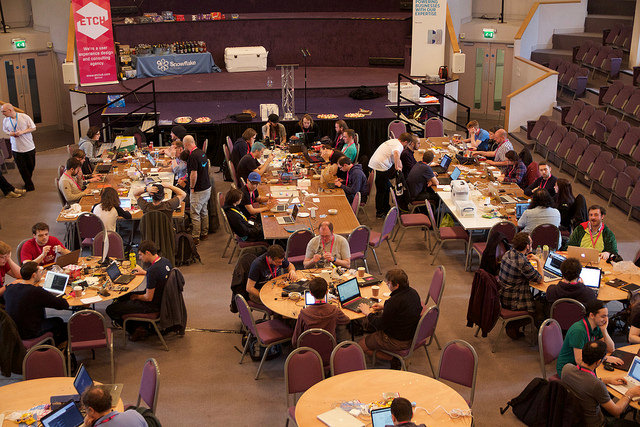 As a maker at heart, I love events like Hacksoton. It’s a chance to come together with like minded people for an entire day of caffeine-fueled hacking, making and programming. Many useful tools have been made in previous years (like my Wissues App for GitHub issue sorting) as well as lots of toys (like this)

A couple years ago, there was one project called Spreadcam by Brandon which my crafty friends and I thought would have an application for making quilt patterns. Essentially, Spreadcam takes the video feed from your webcam and turns it into a spreadsheet. We thought it was pretty cool, and wondered if we could use it to make a grid of squares for a picture quilt. 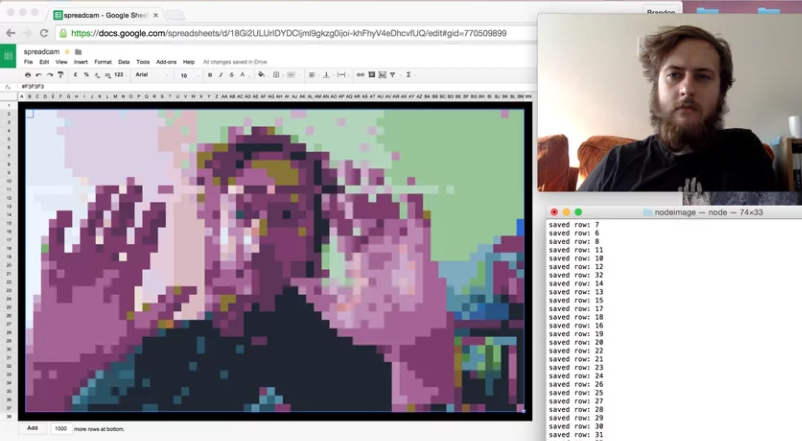 Isn't that cool? And it was in real time too!

Fast forward to 2017 and it was time for Hacksoton again. Now I crochet I had begun to think about Spreadcam again, and realised that it would also be an interesting tool to make a graphgan pattern with. I had never crocheted a graphgan style blanket before, so my first task was to make a graph the traditional pen-and-paper way and crochet a blanket from it. What better thing to crochet than the Hacksoton logo? I literally traced the logo onto graph paper, and decided which squares of the grid were to be coloured in. The process was a little difficult as the logo is very rounded but I managed to get a good pixellated version of the logo. 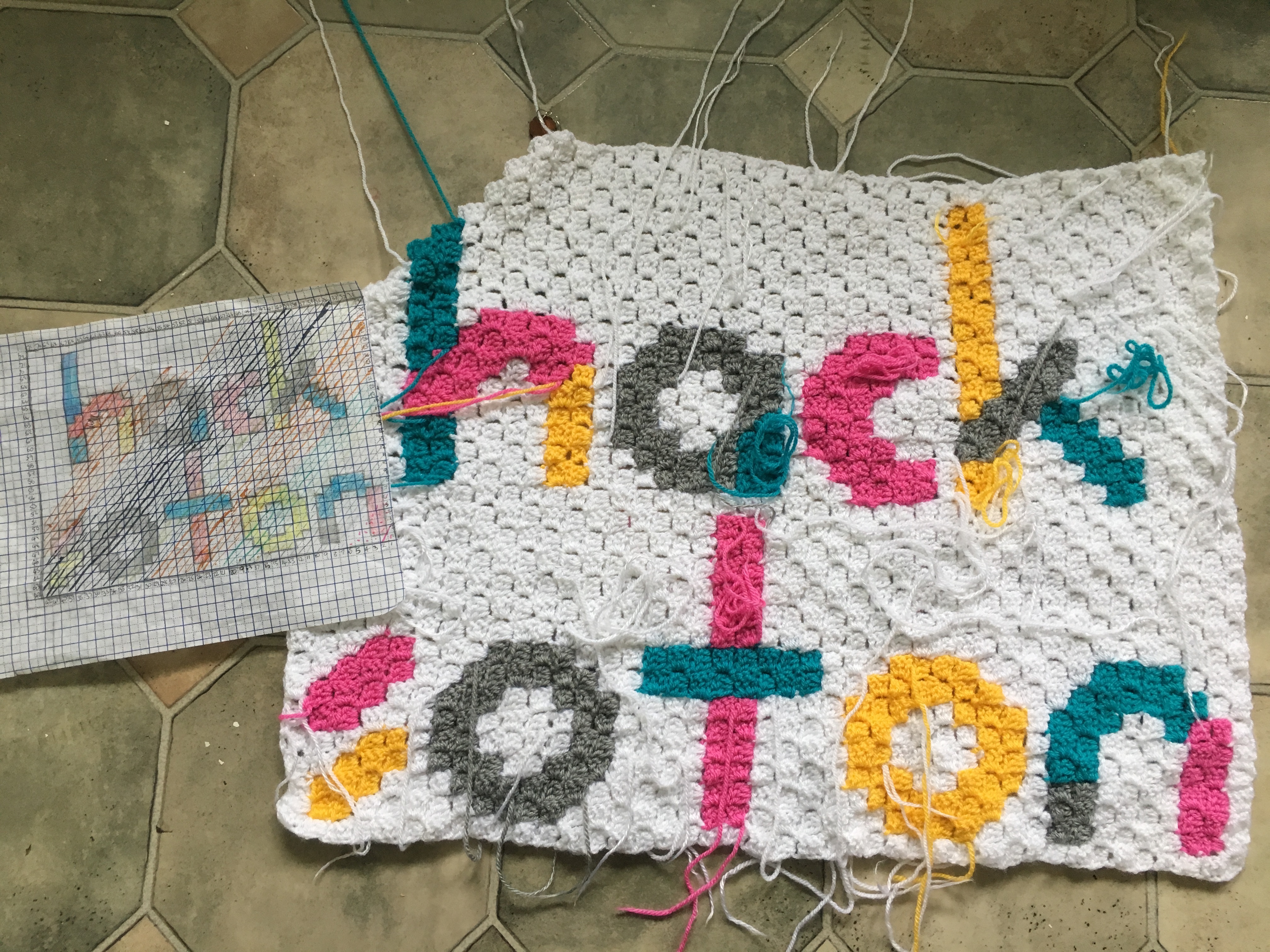 My blanket in progress

The actual crocheting wasn’t too difficult. I made it in the well-known corrner-to-corner style where one starts in the bottom right corner of the blanket and works in diagonal rows to the top left corner. Each pixel was made up of a ch3 and three trebles. Colour changing was easy-peasy so long as I kept to the chart. The only difficult bit was actually following the chart as working on the diagonal was confusing. You can see in the picture that I ended up crossing through each diagonal row as I went to keep track.

So come the day I turned up with my blanket and laptop and got to work. While Spreadcam was the initial inspiration, I started coding from scratch as I thought it’d be better to work from a photo a user uploads. By lunchtime I had a working demo, which worked from some sample images and drew the image into a pixellated chart. After lunch, I downloaded the yarn thumbnails of Stylecraft Special DK and had the program match the picture colours to the yarn colours. This meant that suddenly, the program was using a defined palette which made things look amazing. 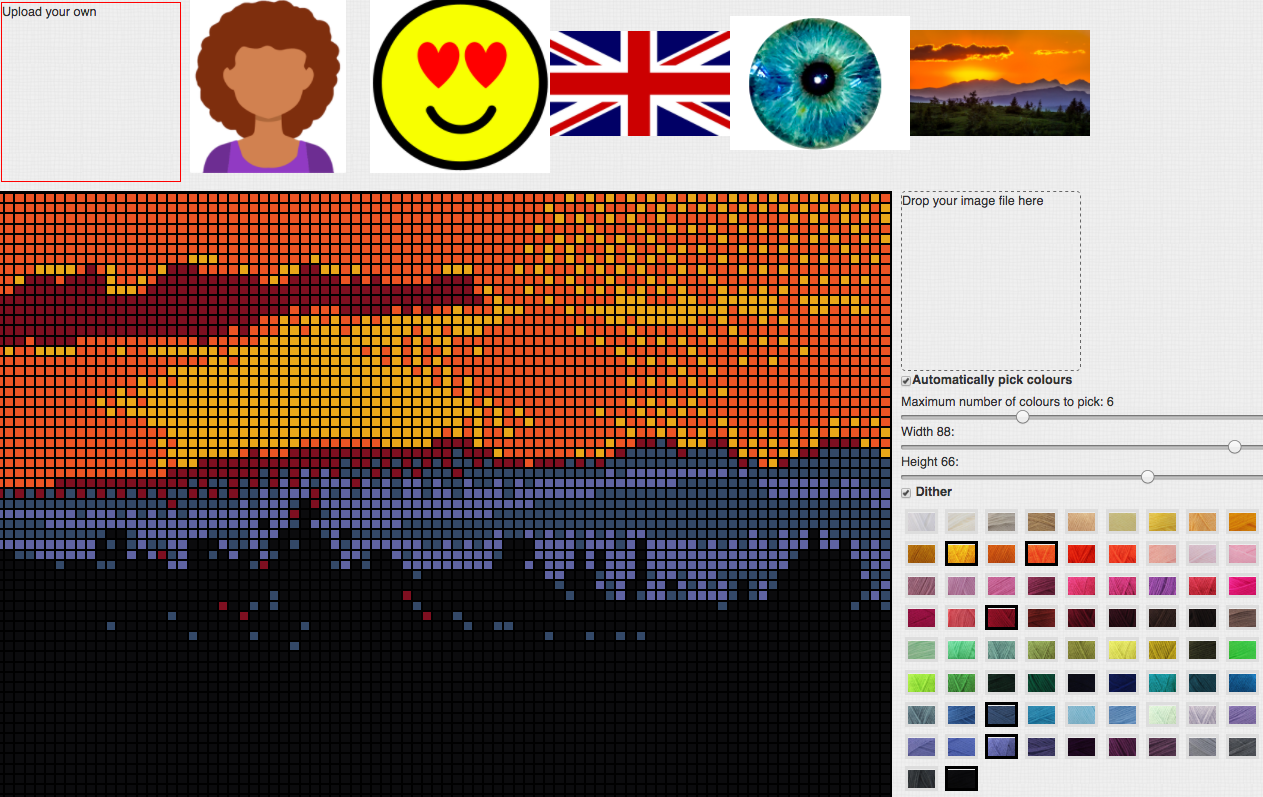 The app I wrote on the day

In the future I want to add a shopping list showing which yarns and how much of each to buy, plus an estimate of the cost. It would also be cool to allow the user to alter the generated image with a paint tool, and generate a written pattern to follow. 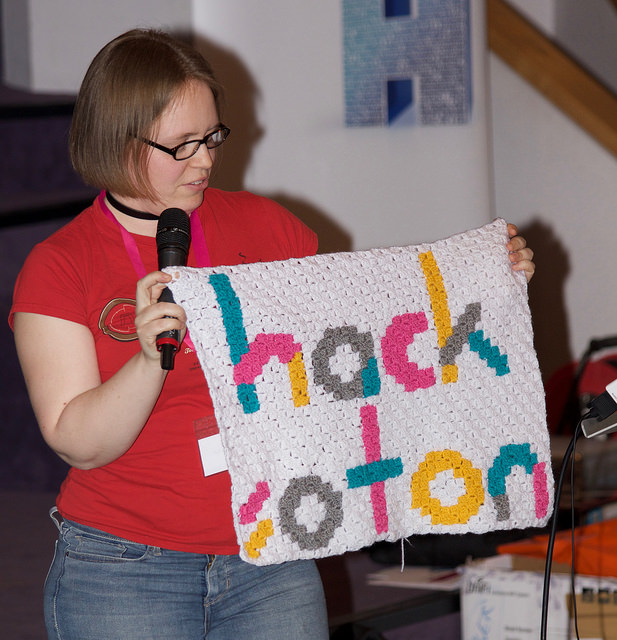 My talk at the end of the day showing off my blanket and my app photo: Phil Dye

The day was rounded out with a visit to the pub with some of our Hacksoton friends. It was at this point that the blanket really came into its own and went from cool thing I had made to a warm thing to wrap yourself in!

All in all, another enjoyable day and I actually managed to get a project finished in a day which is unusual for me! My many thanks to the Hacksoton team and their wonderful sponsors for supporting amateur, professional and first-time programmers in this free, supportive and exciting environment

Some of the awesome photos have come from Phil Dye