I come from a biochemistry background and have been wondering for a while if it’d be possible to crochet the Periodic Table. So what would a Periodic Table afghan look like? I decided to use my site JemsGraphs.com to draw out the basic shape and choose from the suite of 88 colours of Stylecraft Special DK to make a gorgeous patchwork effect.

My draft pattern above showcases the 118 elements, which means 118 different crocheted blocks. That’s quite a lot of blocks! The hard thing will be joining them. I’m thinking I’ll join them one group of elements at a time otherwise it’ll never get finished.

I’ve chosen a different colour for each of the eight main groups of the table, starting with all yellows for group one and going through to pinks for group eight. I’ve chosen blues for the non metals and greens for groups five and six, plus my favourite colour from Nuts About Squares - Bluebell - for the blocks where the elements exhibit both metal and non-metal properties.

The yarns for Group One, lots of shades of yellow

It was harder to pick colours for the transition metal block. I wanted to pick colours which represented the element, as the transition metals can be very colourful. While researching this in more depth, I found this was true for the elements at the top of the block, but those at the bottom are heavier and some are unstable so there’s never been any colour chemistry with them. I’ve left them in silver and grey for now but I might change my mind later.

I’ve left the block of lanthanoids and actinoids in an apricot colour for now, I might put one of them in a slightly different pink, or I might mix up the colours more like in the rest of the transition block. I plan to crochet the transition block elements after groups one to eight so I can make those decisions much, much later! 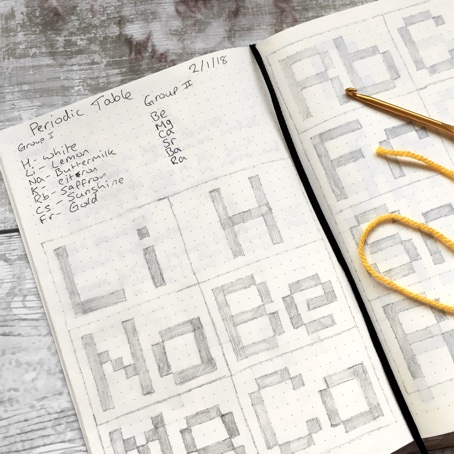 With 118 blocks, plus joining time, I’m hoping I can make this in about a year or 18 months. That means two or three blocks a week, but I’ve already made up Hydrogen in white treble crochet and it’s fairly quick… so hopefully it’ll be finished sooner rather than later! 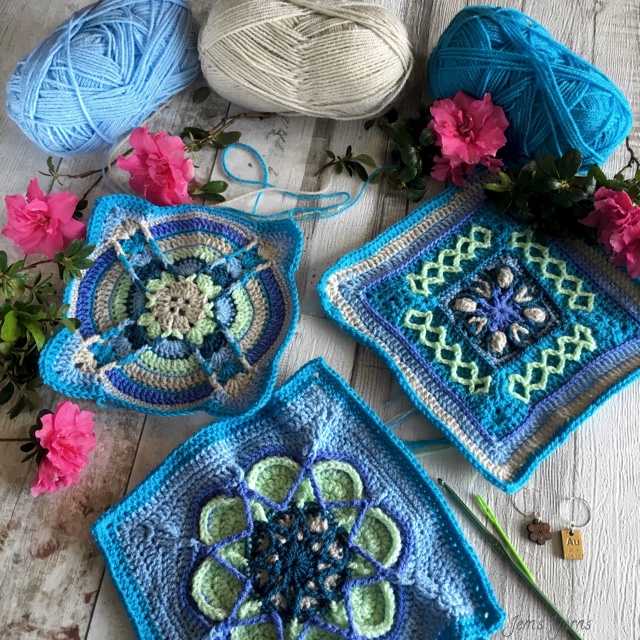 The Nuts About Squares CAL is beautiful

Three weeks ago, something very exciting began. Esther from It’s all in a Nutshell launched her amazing Crochet-A-Long “Nuts About Squares” and the online crochet community went - well - nuts for her brilliant project. The anticipation had been huge, the wait so long, and finally we were able to get started on the first design of 12.

I had decided to use my firm yarn favourite of Stylecraft Special DK, as I knew how soft and gorgeous it already is and I didn’t feel comfortable buying a new yarn from the Netherlands without already having had experience of it. One day I’m sure I’ll get my hands on some Scheepjes yarn and maybe even be converted, but that day is some way in the future when I feel more confident in my crochet skills.

Week one was a pattern by designer Dedri, of Sophie’s Universe fame. I was delighted that we started with a designer I was already familiar with. The square took me quite a while, and by the time I had finished just one, it was time for the second. 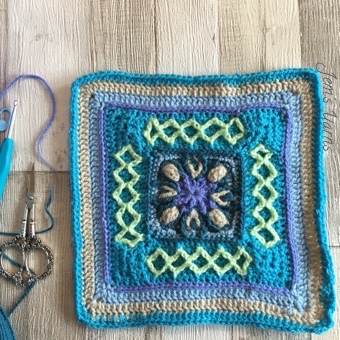 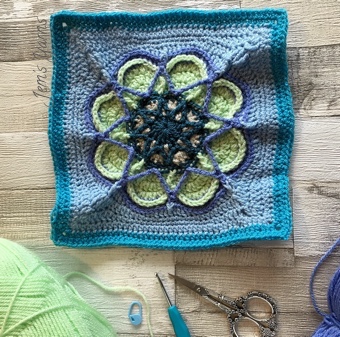 Week three was a welcome change of pace with a pattern from Polly Plum. I found it was an easier pattern to crochet, again honing those front post double treble stitches. I’ve made so many of those now I have managed to successfully make them without the top of the stitch being baggy. 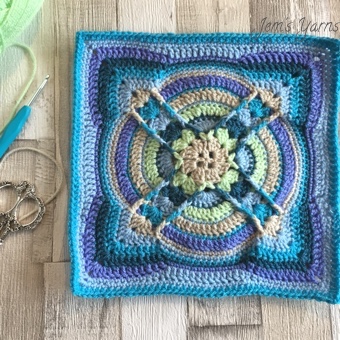 I am now on my way to starting week four, which is a square called Le Vesinet from designer Sigrun Hugoey and starts with nine individual circles. I’ve made up my first set of circles and have watched Esther’s video showing how to join them. I’m not used to getting my yarn needle out so early in a pattern! 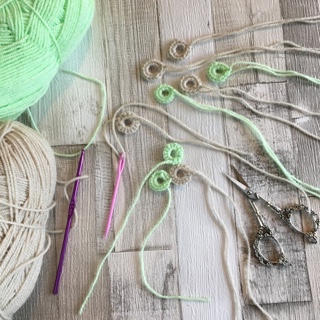 Week 4 is Vesinet by Sigrun Hugoey, and starts in a way which is completely new to me

Welcome to Jem's Yarns. Please note I use UK crochet terms throughout, so there are no 'single crochets' here! See this link for conversions in US terms.